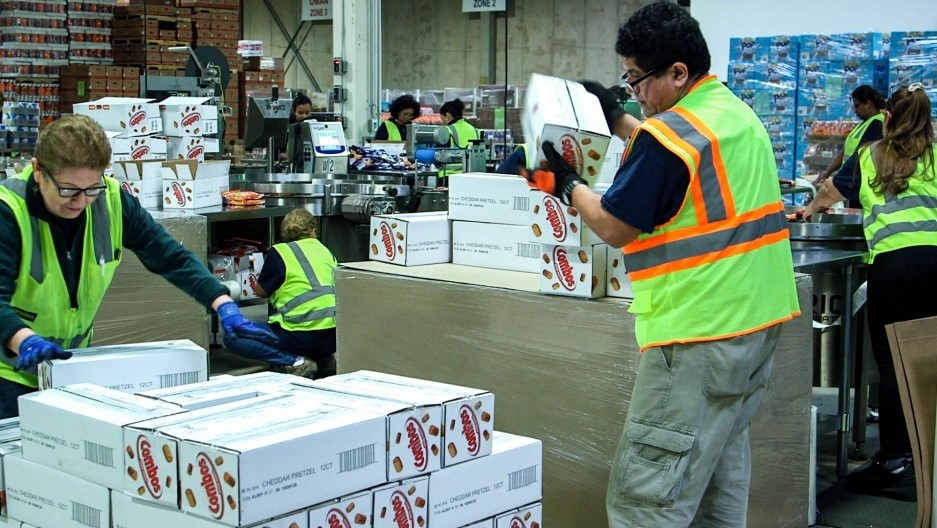 Workers at Y International in Lyndhurst, NJ, repackage boxes of American food products ahead of shipments bound for the Middle East.

Not long ago, Saveur Magazine dubbed New Jersey the most “edible state” in the country, with a food culture more rich and diverse than California or New York. A nice feather in the cap for the state. But going beyond accolades for dishes served up in restaurants, New Jersey is also working to distinguish itself as the nation’s center for the import and export of food.<!–more–>

“We have nearly 2,000 food businesses in our state,” says Michelle Brown, president of Choose New Jersey, an industry-funded non-profit that tries to attract business. “We have more than 190 world headquarters of food companies in our state.”

One of the latest food operations to set up shop in the state is Y International USA, a part of Abu Dhabi-based Lulu Group International. For the past year, workers at a large warehouse in Lyndhurst, in northern New Jersey, have been repackaging boxes and putting Arabic labels on American products bound for the Gulf countries: Saudi Arabia, Abu Dhabi, Dubai, Kuwait, Bahrain, Qatar and Oman.

Why set up shop in New Jersey? Simple.

“Location,” says Scott Weber, Y International’s Regional Manager. “We have the biggest ports in the world. We have five airports that are flying directly to our seven regions that we currently go to, we have direct flights. We have time-sensitive material, which is food.”

Dairy products need to get overseas in a hurry.

Goods coming from New Jersey are bound for the shelves in Lulu’s hypermarkets, a chain sprinkled throughout the Middle East and South Asia, which Weber describes as “Super Walmarts on steroids.” The stores sell everything from food to clothing to electronics. Increasingly, it also offers choices of American food and beverages, again, from New Jersey.
Still, New Jersey, the food capital of America? Really?

“Really, New Jersey!” says Brown, who rattles off the ways she believes her state is the ideal place to import and export food.

“We have great rail,” says Brown. “Warehousing in the state New Jersey is probably the hottest industry right now.”

Brown adds that companies can reach 22 million consumers within a two-hour drive.

One of the bigger food companies in northern New Jersey is Goya, the largest Hispanic-owned food company in the US. The company just revamped a factory in New Jersey last year, which can now package 600 bags of rice a minute.

And, if you’re a foreign food company looking to launch a product in in the US, New Jersey is trying to make another selling point: the nation’s only certified “soft landing” food incubator, the Rutgers Food Innovation Center (FIC) in the city of Bridgeton in southern New Jersey. The FIC will basically hold your hand to get your product launched, helping with everything from food safety regulations to marketing to finding out what an American consumer might like.

FIC Executive Director Lou Cooperhouse says many of his international customers think the biggest challenge selling in the US will be regulatory. It’s not.

“Their biggest challenge is actually marketing. It’s such a competitive landscape in America,” says Cooperhouse. “It is so different than the European market, so it’s really important that they differentiate themselves. Just because a product sells well in Europe, it’s easily to get lost in America.”

Greek investor Takis Solomos has come to rely on Rutgers. He’s worked with the FIC on five projects, and is now working on bringing kebab meats to the US with the Greek company Megas Yeeros, the largest gyro producer in the Mediterranean.

“We know that we can pick up a phone and make a call to a friend, get some assistance,” says Solomos. “The guys there are great.”

Even when they’re giving candid, but harsh advice. Solomos says they were ready to roll out a style of Greek sausage for American consumers, then Lou Cooperhouse and his team weighed in.
“I actually liked it. But I knew it was different,” says Cooperhouse. “We were unusually split, half the group literally hated it. This was a combination of flavors that was out there. All that being said, I got back with an honest answer and said, ‘no.’”

Better to hear that before you go to market.

The folks in New Jersey do want Greek sausages to be a winner though. Cooperhouse says successful foreign products translate into more food-related jobs in New Jersey.

“The county that we’re in, Cumberland County, is actually the poorest county in terms of per capita income in the entire state. We’re also in one of the poorest cities of over 500 cities in New Jersey. But we’re really taking a very aggressive route at the globalization of the food economy,” says Cooperhouse.

At the end of the day, Cooperhouse, and others in the state, think they’ve got enough to offer, so when foreign food companies think of coming to the US, they’ll think first of The Garden State.
Cooperhouse says, “We’re really taking the mentality of Hollywood, as it is to entertainment, and applying that same logic to having New Jersey being the cluster for the food sector.”